This site only supports commonly available internet browsers such as Google Chrome, Mozilla Firefox and Microsoft Edge. Internet Explorer is no longer supported as of June 15, 2022. Read more here. Please use the links below to learn more and download a compatible browser.

We look forward to seeing you Wednesday, Feb. 15 through Saturday, Feb. 18, 2023 for the 57th National Farm Machinery Show. This event is free and open to the public. Parking rates are $12 for cars.

The National Farm Machinery Show has offered the most complete selection of cutting-edge agricultural products, equipment and services available in the farming industry. Business professionals from around the world gain knowledge and hands-on access to various technological advancements needed for the upcoming farming season during the four-day show.

The Kentucky Exposition Center is completely filled with more than 1,500 booths, making it the country’s largest indoor farm show. Nearly every major line of farming equipment will be on display allowing attendees to compare products side by side. The most innovative technology and new product launches are available to agribusiness professionals, as well as alternative energy information and solutions to the challenges facing today’s agribusiness industry.

In addition to seeing the newest products on the market, visitors can attend free seminars led by industry experts. 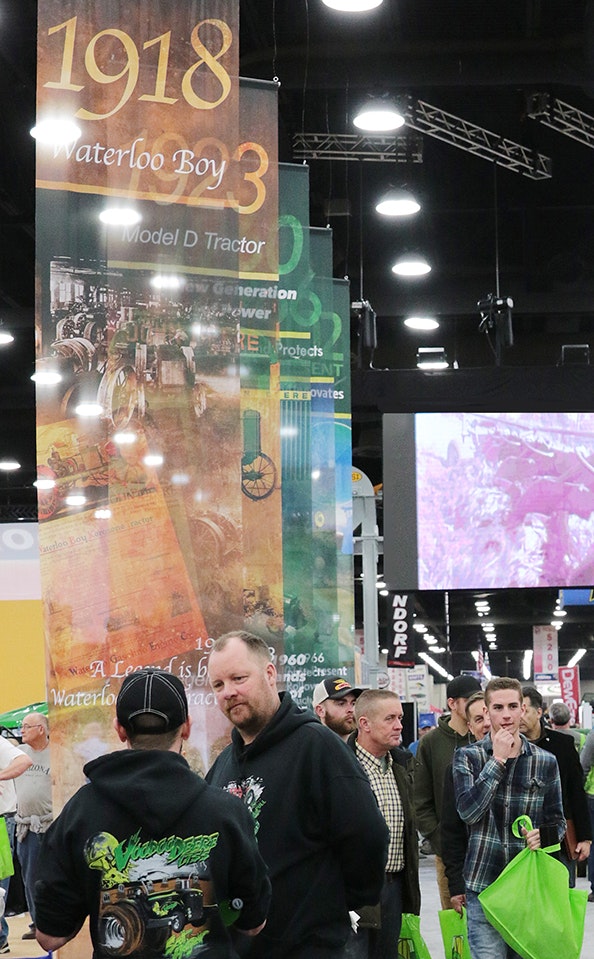 The agricultural industry has continued to evolve. Rural family farms marked the landscape before big business boomed. Americans, who once relied on subsistence farming, shifted to large-scale, industrialized, vertically integrated "agribusiness." Yet through the boom and bust, the traditions and the new conventions, the National Farm Machinery Show has found a niche that satisfies the changing needs of developing farmers.

Two shows shaped the beginnings of the National Farm Machinery Show. In 1963, the University of Kentucky sponsored an electricity demonstration and exhibit for farmers in Lexington. That initial show opened the door, eventually expanding to include more types of power including agricultural power.

In addition, the most prominent and popular commercial exhibitors during the first forty years of the Kentucky State Fair were related to the farming industry. Power equipment valued at half a million dollars at the Farm Implement Show took up more than thirty acres of the fairgrounds. Due to its popularity and the growing agricultural interests in the region, many knew the time was ripe to expand.

Ultimately in February 1965, a few hundred farmers, salesmen and crop experts gathered in the Kentucky Fair & Exposition Center to start a farm show. That year, commodity prices were high and farmers were experiencing record-high profits. The farm show then added an entertainment element four years after its inception with the Championship Tractor Pull. In 1969, the first Championship Tractor Pull was the first major indoor event in Freedom Hall and attracted 66 tractors in three classes. Now the nation’s oldest tractor pull continues to enjoy popularity with people whose heroes are farmers and whose obsessions revolve around machinery and horsepower.

Louisville’s location in the agriculturally-rich Midwest and Southern corridor was accessible and attractive to farm equipment manufacturers and dealers from around the nation. The exhibitors found an organized show in a central location where they could display their agriculture products, services, and equipment to an interested audience of professional and recreational farmers. The once-tiny farm show is now the nation’s largest indoor ag trade show and plans to host over 300,000 attendees and exhibitors.

Salespeople and industry experts spread over 27 acres of interconnected indoor exhibit space educating farmers and looking for potential buyers. The show, now in its fifth decade, showcases innovative technology, new product launches, and alternative energy, among others. In addition to gaining hands-on access to the newest and most innovative products on the market, attendees will also benefit from the selection of free seminars led by some of the industry’s top experts.

Industry officials and manufacturers seem to universally agree that, while large equipment sales remain strong, significant opportunities exist with the smaller-acreage farming machines. And that bodes well for the staying power of the National Farm Machinery Show. With more than 900 booths, the show floor provides farming equipment, technology and gear for every attendee.

Because the show is early in the farming season, it tends to help forecast the season to come. A feat foreshadowed by then-Kentucky Governor Edward Breathitt, who remarked at the opening address of the second annual National Farm Machinery Show that the future of the show has "untold educational benefits" and "a myriad of other possibilities [for the] agricultural industry."

Prices:
Free Admission, Parking $12 for cars and $25 for busses.

Seminars:
Seminars are free for all attendees.